One of the most powerful weapons in preventing colon cancer is having regular screenings between age 45 and 50. If you have a family history of colon cancer, talk to your doctor about getting screened earlier or more frequently. Since most colon cancers start as polyps, these non-cancerous growths can be removed before they turn into cancer during a colonoscopy. When colorectal cancer is found early, it is highly curable.

The American Cancer Society believes that preventing colorectal cancer (and not just finding it early) should be a major reason for getting tested. Finding and removing polyps keeps some people from getting colorectal cancer. Tests that have the best chance of finding both polyps and cancer are preferred if these tests are available to you and you are willing to have them.

Beginning at age 50, both men and women at average risk for developing colorectal cancer should have a Colonoscopy every 10 years at a minimum.

People at increased risk:
If you are at an increased or high risk of colorectal cancer, you should begin colorectal cancer screening before age 50 and/or be screened more often. The following conditions make your risk higher than average:

Endoscopy (en-dahs-kuh-pee) is a medical procedure that uses tube-like instruments (called endoscopes.) These are put into the body to look inside. This procedure is different from imaging tests, like x-rays and CT scans, which can get pictures of the inside the body without putting instruments into it.

There are many different kinds of endoscopes, or "scopes." Some are hollow and allow the doctor to look right into the body. Others use fiber optics -- flexible glass or plastic fibers that transmit light. Still others have small video cameras on the end that put pictures on computer screens. Some endoscopes are stiff, while others are flexible. Endoscopes also vary in length. Each type is specially designed for looking at a certain part of the body.

Upper GI endoscopy can be used to remove stuck objects, including food, and to treat conditions such as bleeding ulcers. It can also be used to biopsy tissue in the upper GI tract. During a biopsy, a small piece of tissue is removed for later examination with a microscope.

Endoscopy is used to diagnose and sometimes, treat conditions that affect the upper part of the digestive system, including the esophagus, stomach and beginning of the small intestine (duodenum).

You doctor may recommend an endoscopy procedure to:

Treat certain digestive system problems.  Using special tools during endoscopy allows your doctor to treat certain problems in you digestive system, such as bleeding from the esophagus or stomach and difficulty swallowing caused by a narrow esophagus, or to remove polyps.  Endoscopy can also be used to remove foreign objects lodged in your upper digestive tract.

Is it "just" Heartburn
You know what it feels like. BUT do you know what it can do to you?
That burning sensation is caused by stomach acids backing up into your esophagus, the tube that carries food to your stomach. Those acids can damage delicate tissue. Sometimes the damage leads to cancer.

That's why chronic heartburn is something you can't ignore.

When is heartburn MORE than "just" heartburn? 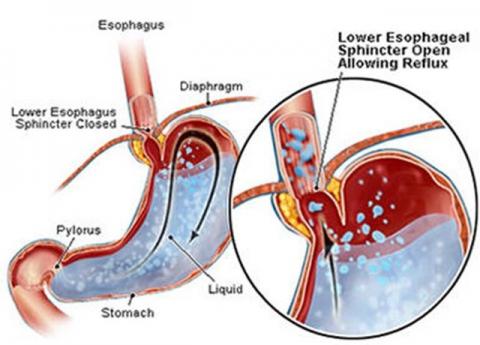 If you suffer from heartburn more than twice a week or have trouble falling asleep due to chronic acid reflux, you may have gastroesophageal reflux disease or GERD.

What is GERD?
GERD (gastroesophageal reflux disorder) is a malfunction of the valve between the stomach and the esophagus (the swallowing tube that leads from the mouth to the stomach). When the valve does not close fully (or not at all) the contents of the stomach, like—acid and enzymes, leak back into the esophagus. This is called reflux. Some reflux is normal, but if symptoms occur more than twice a week a specialist in Gastroenterology should be consulted for evaluation and treatment.

GERD puts you at risk for Barrett's esophagus—a pre-cancer condition.

The HALO procedure uses radiofrequency ablation (RFA) delivered thru an endoscope to destroy the diseased lining of the esophagus and allow normal tissue to regenerate.

Specialists at Eastern Long Island Hospital are leaders in the treatment of Barrett's esophagus and certified to perform the HALO procedure.

The procedure usually requires three to four treatments for the tissue of the esophagus lining to regenerate. Ongoing management of GERD is important to support the re-growth of healthy tissue.

How GERD Leads to Barrett's 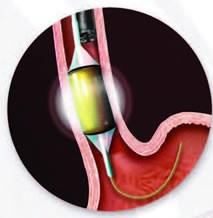 If you have chronic acid reflux or frequent heartburn, you are at risk for a condition called Barrett's esophagus.

Barrett's esophagus is a change in the lining of the esophagus, the swallowing tube that carries foods and liquids from the mouth to the stomach. Left untreated, it can lead to cancer of the esophagus. About 3.3 million American adults have Barrett's.

Barrett's and Cancer
Cancer occurs when the abnormal cells involved in Barrett's esophagus have rapid and uncontrolled growth and invade the deeper layers of your esophagus. This is called cancer of the esophagus, or esophageal adenocarcinoma (EAC). The cancer can also spread beyond the esophagus.

Patients with the first phase of Barrett's esophagus (intestinal metaplasia) have a combined risk of 1.4% per year of progressing to high-grade dysplasia or cancer ("dysplasia" refers to abnormalities of a tissue or cell that make it more cancer-like and disorganized). While rare, cancer of the esophagus is the most rapidly rising cancer in the U.S. It is often incurable because it is frequently discovered at a late stage.