24,000 volunteer hours - and counting for Greenport woman at ELIH 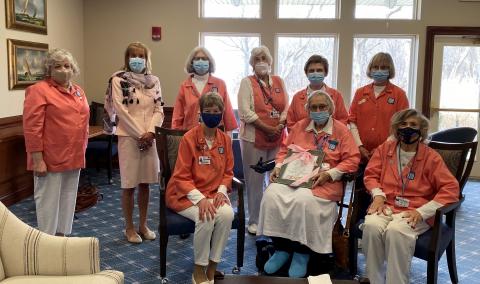 For someone who has put in so much time — more time than any other Eastern Long Island Hospital Auxiliary volunteer has ever logged — the time had finally come for Nora Busch to be acknowledged for her service to the Greenport hospital and its auxiliary.

Ms. Busch was visited by hospital and auxiliary officials March 31 and presented with a proclamation for her dedication and outstanding career as an ELIH auxilian. The number of the day was 24,000 — as in the number of volunteer hours Ms. Busch has put into her labor of love, serving the auxiliary for 25 years running. No one else has ever clocked more volunteer hours for the auxiliary.

The presentation at Peconic Landing in Greenport, where Ms. Busch lives in an assisted living facility, was originally planned for April of 2020, but postponed because of the pandemic. ELIH Auxiliary president Helene Fall had the award sitting on her desk for a year.

“She had a plaque made up with all the different offices I was in for those 25 years,” Ms. Busch, who turned 94 on March 8, said in a phone interview. “Now it’s hanging on my wall with a pink ribbon around it. It was a real surprise and it was wonderful.”

In 1996, Ms. Busch, a retired social worker, visited what is now called Stony Brook Eastern Long Island Hospital for a routine procedure when a poster for volunteer services caught her eye. That initiated her long association with the auxiliary.

Ms. Busch said much of her time with the auxiliary has involved record-keeping. She has served as auxiliary president, ELIH Board of Trustees member, volunteer services treasurer, Dream Green treasurer, Corner Shop treasurer, Opportunity Shop volunteer and is still accruing volunteer hours as the auxiliary board corresponding secretary. That means her service time is over 24,000 hours — and counting.

“It is a monumental achievement,” Ms. Fall said. She added: “It’s also inspiring. Nora herself is an inspiring person.”

Ms. Busch said she was last in the hospital in December of 2019. At that point, she had to cut back on her duties because of physical limitations. By then she had already hit 24,000 hours and surpassed the previous leader, the late Toni DeMeo (23,000 hours).

“I do remember I was determined to stay in until I got more,” Ms. Busch said. “I would still be in there except for two things: My legs became involved and I couldn’t walk without aid, and because of the virus.”

Asked about her achievement, she said: “It was a family. I miss it very much, let’s put it that way. I miss being a pink lady.”

That is a reference to the easily identifiable uniforms worn by the female auxiliary volunteers: white pants, white shirts and pink smocks.

The Greenport hospital was established in 1905, the first volunteer hospital in Suffolk County, according to Linda Sweeney, Stony Brook Eastern Long Island Hospital vice president of foundation/external affairs. The following year, the “Ladies Auxiliary” was formed and it became the oldest auxiliary on Long Island, according to the hospital’s history.

The auxiliary consists of approximately 150 women and men who devote over 23,000 volunteer hours annually. In addition to fundraising efforts, auxilians work at the front desk in the hospital lobby, assist with patient transport, welcome visitors and perform clerical duties.

Ms. Busch was 81 when she jumped out of a plane to skydive in Calverton.

“It was a nice day, and I wanted to jump out of an airplane,” she said. “I would say we were going pretty fast, but I would not find it unpleasant or scary.”

When people asked Ms. Busch if she would do it again, her reply was, “Been there, done that.”

Ms. Busch also may have surprised some in 2010 when she told a tattooed grandson that she wanted a tattoo and got one — a hummingbird on her left arm, between her shoulder and elbow.

As Ms. Busch’s volunteer hours continue to rise, one wonders if her record will ever be broken by someone else one day.

“I think right now we do have some members who are at 14,000 hours, but I think anything in life is possible,” Ms. Fall said. “We definitely have some active women. Maybe some day. I don’t know, though. It would be an achievement, that is for sure.”