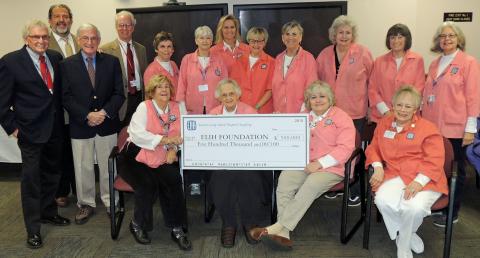 The Eastern Long Island Hospital (ELIH) Auxiliary has once again broken their previous fundraising record by donating over $500,000 for Stony Brook Eastern Long Island Hospital (SBELIH) in 2019. This spectacular donation makes the Auxiliary the hospital’s top donor of 2019. At the close of 2016, the volunteers made a milestone contribution of $400,000 to the hospital, and they have increased their annual contribution to the hospital each year since hitting that milestone.

“This is an extraordinary group,” says Paul Connor, Chief Administrative Officer of SBELIH, “The Auxiliary is the common thread between 1905 and present day.”

The ELIH Auxiliary predates the hospital by one year, and consists of approximately 200 dedicated women and men who contribute in excess of 23,000 volunteer hours annually. Volunteers donate their time and talent at the Opportunity Shop in Greenport, the Corner Shop at SBELIH, and they man the front desk in the hospital lobby. They also assist with patient transport, welcome visitors, and perform varied clerical duties throughout the hospital on a daily basis.

“We were formed to do exactly what we do today, to provide services and support to this hospital and the community to ensure that healthcare flourishes here on the North Fork,” says Helene V. Fall, President of the ELIH Auxiliary. “We all work together to make sure that the Auxiliary is successful, and over the years, our fundraising activities have increased.”

The Auxiliary raises funds for SBELIH in many different ways. Their annual fundraising events include a “Head to Toe” Fashion Show and a “Car Raffle” in May, and the famous “Dream Green Extravaganza” that awards cash prizes to 65 lucky winners at the Maritime Festival in Greenport each September. Additionally, volunteers organize and host an “Italian Nite Dinner” in October, a “Ladies’ Day on the Links” golf outing, and a “North Fork Open” tennis tournament later in the fall. Volunteers raise funds year round by selling community-donated merchandise at the Opportunity Shop, and by selling snacks and other convenience items at the hospital’s Corner Shop.

“We’re a very small hospital compared to others in New York State, yet the [ELIH] Auxiliary outperforms all of these other hospitals,” says Paul Connor. The Auxiliary has raised over $10,000,000 for the hospital over the years, and has received several awards in recognition of their stellar performance. These awards include the 2017 Community Service Award from the North Fork Chamber of Commerce and the 2017 Older American Champions Award from Peconic Landing. The ELIH Auxiliary was also named Auxiliary of the Year in 2013 and Best Small Auxiliary in 2017 by the Health Care Association of New York State (HANY).