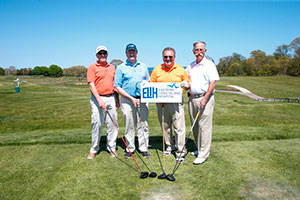 The ELIH Golf Classic will be played as a scramble. A golf scramble is a format for golf tournaments where two or more players form a team to play, with the rules emphasizing fun without the pressure of players keeping individual scores. Each player hits a tee shot on each hole, but everyone plays from the spot of the best shot, subject to certain criteria. Rules for playing in a scramble are informal, with tournament organizers modifying basic rules as they wish. For example, organizers may require a group to select each player’s tee shot at least twice. The scramble format is not covered under the official Rules of Golf.

Tips
If you are selecting a scramble team, try to include at least one player who can hit good tee shots with the driver. Good tee shots will put your team in a good position for its second shot. Having a player who has good short-game skills also helps, especially putting.